Women’s Day 9 August fell on a Thursday this year so Significant Other and I made a long weekend of it and headed for the Cederberg for a much anticipated overnight hike.

We left Cape Town at the crack of dawn and parked under the trees at the old Welbedacht Forest Station.  By 10am we were ready to head out.  *2 pair of socks on (to prevent blisters), well-traveled hiking boots, putties (gaiters, to keep Nature out of the boots), sling on the 14kg pack, tighten the straps, pick up the trekking poles* and off we go.

Not 100m from the start – a swollen river with no way around!  Put down poles, strip off putties, boots, outer socks, inner socks, roll up pant legs and tenderly cross the icy, stony-bottomed river.  Reach the other side, mutter, repeat steps between *.

Significant Other always says if you want to see mountains you need to go up.  So up the Welbedacht Kloof we go.  All those fantastic rock formations that the Cederberg is known for!  All the way we go “Look at that rock – it looks like (an eagle, a dragon, a chicken, a toast rack, someone from work)”.  The other party either sees what you see or considers if other symptoms of altitude sickness are evident. 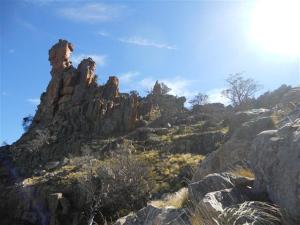 We have a brief lunch of peanuts and jelly tots at the Welbedacht Cave and head further up and after a steady climb of 550m over about 5km we finally reach “Die Trap” (The Step), the level shale band where walking is a lot easier than up the steep sides.  But don’t be fooled – we still climb another 150m as we walk along the path, which is now a jeep track, to Sleeppad hut. 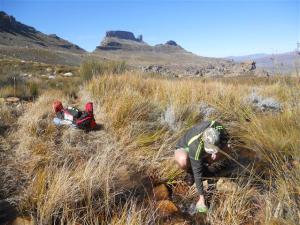 Water point, Tafelberg & The Spout in the background

A roof over our heads

Up yet another inconvenient hillock and there it is down the hill on our left – shelter!   Sleeppad Hut is no hotel.  Two rooms (one of which has no glass in the window), a tin roof, cement floor with some dry grass on it, no plumbing.  But a welcome sight for tired hikers!  And warmer and roomier than the expedition tent we brought along just in case. 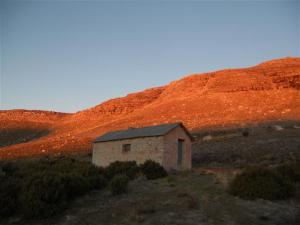 You won’t get a view like this from any hotel either! 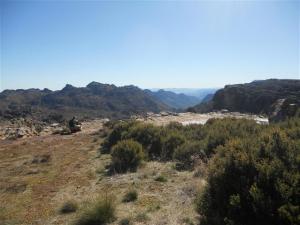 Hut with a view

Supper was going to be marinated steak (vacuum packed for the trip – you don’t want marinade sloshing around your pack!), couscous and red wine.  All these culinary delights were lugged by Significant Other – well, except for the couscous which somehow got left behind.  So our starch was vanilla biscuits.  You can’t make open fires in wilderness areas so the steak was cooked in a dixie over the hiking stove and wow! – it was the best steak ever!  We usually take soya mince so you can see how a delicious steak is an improvement…

… a concrete floor ain’t.  Especially for those of us with hips.  But otherwise we were totally cozy in our down sleeping bags with home-made polar fleece liners.  There was quite a bit of wind in the night so we were glad to be in a solid structure and not the tent.   Morning dawned crisp and clear.

What goes up must come down

After breakfast we set off for Day 2 at around 9am.  We went down the steep mini-pass that starts just below the hut.  Past more fantastic rock formations and even a few Clanwilliam Cedars (Widdringtonia cedarbergensis). 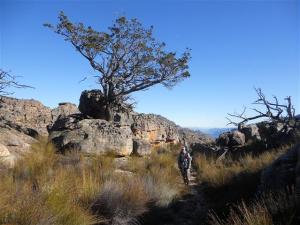 Let me get serious for a minute.  These majestic trees were once plentiful in the Cederberg (the only place where they occur) but were cut down in large numbers for their wood and too many man-made fires destroyed those that escaped the blades.  See http://www.iucnredlist.org/details/30365/0.  It breaks my heart when I see the skeletons of these giants.  Makes me wish we could sometimes press “Undo”…

Big Country Plain.  This strange plain high in the mountains really appealed to me.  We had morning tea here.  Okay it was Game and there wasn’t a cucumber sandwich in sight, old chap.  But there was a troop of baboons leisurely checking rocks for scorpions and enjoying the sunshine. 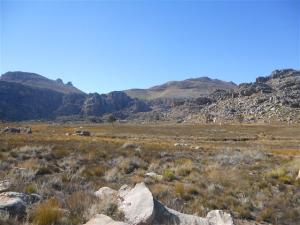 A shortish climb out of the Vlakte past the Uilsgat Needles (I didn’t see anything resembling needles from this part of the path, maybe more evident from the other side?) and then we were on the final stretch – sort of…

The end is in sight

More or less after you’ve passed the peak supposedly topped by the Uilsgat Needles you can see Welbedacht’s oak trees way off in the distance.  But there is a descent of about 400m and a good 5 or 6km still to go before you get back to those oak trees.   Strydom se Pad is a seemingly endless (to me at least – don’t like downhills) rocky path  that brings you out at the jeep track and final 2km stretch to Welbedacht. 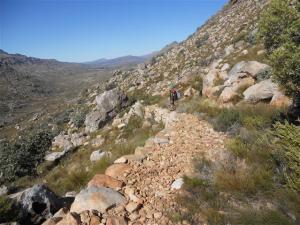 Strydom se pad, the two dark dots down in the plain are the oaks at Welbedacht.

There are some leopard traps near the end of the hike that are used by the Cape Leopard Trust to monitor these cats for conservation.  Luckily there were no peeved pussycats in these traps when we passed.

After doing the footwear off – into freezing river – ouch these stones are hard on city girl feet – footwear on business again (by now I was having a sense of humour failure about these things) we reached our trusty steed thankfully still parked under the oak trees, and we were able to look back at where we’d been and feel that sense of awe and wellbeing that always follows a hike.

Not wanting to drive back to Cape Town after finishing the hike, we had booked a campsite at the nearby Driehoek Guest Farm for the night  We had tried to book a basic hut but they were fully booked so it was going to be the tent for us, and there was Weather coming in.  (Those familiar with the Western Cape will know why I capitalised “Weather” – a good winter frontal system is not for sissies).

Driehoek receives a lot of positive commentary on the web and rightly so.  Everything is well maintained and the staff go out of their way for the guests.   The lady at the office remembered us and offered us a basic hut which had become available.   What a blessing, because the Weather really did arrive that night – rain, hail, thunder, wind, the works!  Snow on the high ground, sleet at our level.  There was a large group in the campsite who quickly discovered that the ablution block provided better protection against the elements than a department store tent.

When the time came for us to leave for home on Saturday morning we found we could not cross even the first drift so it was the hut for another night.  By this time our provisions were running low and the shop at the Driehoek office is understandably not Woolies, so supper that night consisted of Lays Potato Chips mixed with the instant onion gravy meant for the missing couscous – yum!

Snow on the high ground

Sunday morning dawned chilly and cloudy but rain-free and the water over the drift was markedly lower.  We said our goodbyes at the Driehoek office and pointed the trusty steed back towards Cape Town.

So long, Cederberg – we’ll be back soon!